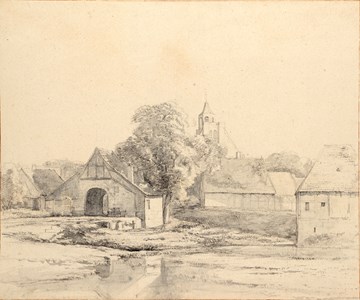 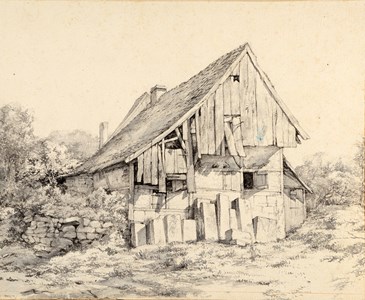 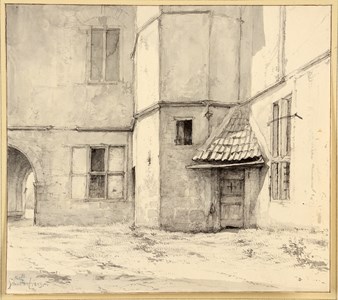 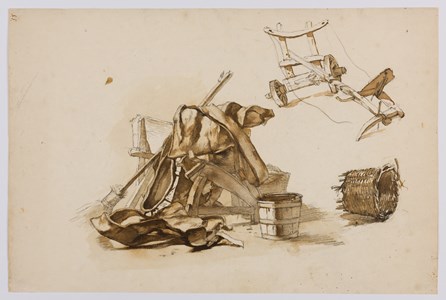 Born into a wealthy family in Amsterdam (his mother was the great-granddaughter of the painter Ferdinand Bol), Albertus Brondgeest’s interest in art was sparked by a visit, as a young boy, to the auction of the collection of Cornelis Ploos van Amstel in 1800. Apprenticed to the painter Pieter Gerardus van Os, Brondgeest made an intensive study of the work of 17th century Dutch artists – primarily drawings - that could be seen in the Amsterdam collections of his day. In 1817 he began working as an art dealer, broker and auctioneer, while continuing to paint and draw in his spare time. He was a member of the Amsterdam drawing society known as Zonder Wet of Spreuk (‘Without Law or Motto’), and each summer until around 1828 he made drawings from nature on sketching trips lasting several weeks, visiting sites in Germany, Belgium, France and England. Around 1840 he bought a country estate on the river Zuiderspaarne near Haarlem, where he continued to work from nature, although by this time his style was somewhat old-fashioned. A leading figure in the Amsterdam art market in the middle of the 19th century, Brondgeest was also a noted art collector.As Robert-Jan te Rijdt has written, ‘As an artist, Albertus Brondgeest is today an all but forgotten figure. And yet...some of his subtly wrought landscape drawings are of exceptional quality...Impeccable taste, a discerning reticence, and a particularly fine technique formed the basis of his drawing style. Like almost all the draughtsmen of his generation, he never seems to have attempted large, stirring, or exceptionally ambitious drawings, but instead consistently strived for a certain ‘decorum’ in his work.’ Drawings by Brondgeest are today in the Rijksprentenkabinet in Amsterdam, the Harvard Art Museums in Cambridge, MA, the Teylers Museum in Haarlem, the Frits Lugt Collection at the Fondation Custodia in Paris, the Boijmans- van Beuningen Museum in Rotterdam, and elsewhere.