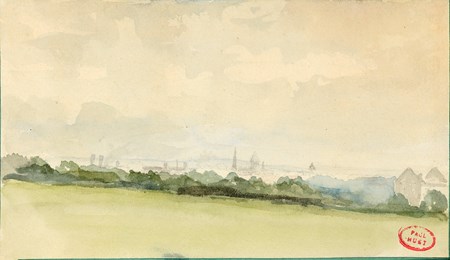 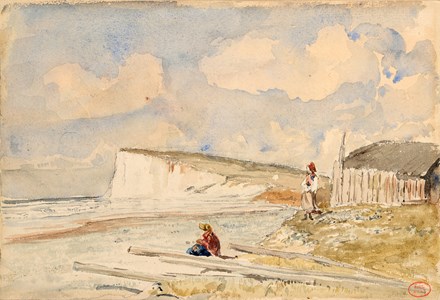 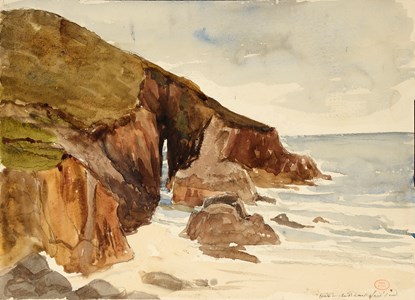 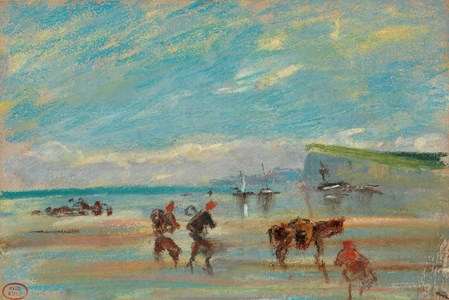 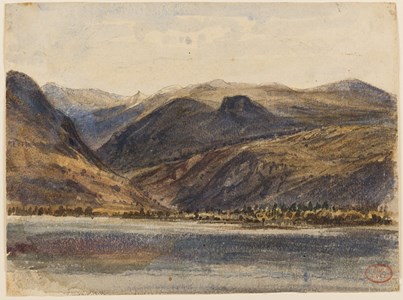 As a young boy and only child, Paul Huet spent his summers drawing and sketching on the Ile Séguin, near Paris, and after leaving school decided to take up studies as an artist. In 1820, while training in the studio of Baron Gros at the Ecole des Beaux-Arts, he met and befriended a fellow student, the young Englishman Richard Parkes Bonington. Huet, who like all of Gros’s students was engaged in the practice of plein-air sketching, learned the English manner of watercolour technique from Bonington, and his rapid command of the medium has meant that works by the two artists have often been confused. At around the same time, he also came into contact with another young painter, Eugène Delacroix, who shared a studio in Paris with Bonington. Delacroix had admired Huet’s watercolours in a shop window, and who was to remain a lifelong friend. Another early influence were the landscape paintings of John Constable, which were a revelation to the young artist when they were first exhibited in France at the Salon of 1824. In 1826, Huet assisted Delacroix by painting the landscape background of the latter’s full-length portrait of Louis-Auguste Schwiter, now in the National Gallery in London. Following his own Salon debut in 1827, Huet accompanied Bonington on a sketching tour of the Normandy coast. This was to be the first of his extensive travels throughout France, and the artist was to return often to the regions of Normandy, the Auvergne and Provence, as well as forests of Compiègne and Fontainebleau, closer to Paris. At the Salon of 1831 Huet’s work was praised by the critic Gustave Planche, who noted that ‘M. Paul Huet is today placed at the head of the new school of landscapists...[he] has wanted, and still wants, after numerous and purely personal reflections, to take landscape painting back to nature, and that to get there he has sensed the imperious necessity of breaking violently and brusquely with currently adopted principles.’Since both he and his wife were often beset by poor health, Huet made several visits to the South of France between 1833 and 1845, and also travelled to Italy in 1841. Wherever he went, he made numerous drawings and sketches sur le motif in pencil, pastel and watercolour, all imbued with a remarkable feeling for light and colour. As he once wrote, ‘pour le paysage la couleur est indispensable: c’est sa plus vive expression, il ne peut s’en passer, pas plus que du dessin.’ In 1837 Huet was appointed drawing master to the Duchesse d’Orléans, and the following year received an important commission from the Duc d’Orléans for a series of finished watercolour views of the major cities of France, for which he was paid two thousand francs. Much of Huet’s work remained with his family after his death in 1869, with only a part of this studio inventory dispersed at auction in Paris in 1878.