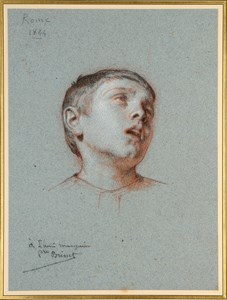 A painter of historical, religious and mythological scenes, as well as portraits and landscapes, Pierre-Nicolas Brisset was a pupil of Louis-Charles-Auguste Couder and François-Édouard Picot, and visited Italy in 1835. He achieved second place in the Prix de Rome competition for painting in 1837, alongside Thomas Couture and Jean-Baptiste Guignet, and three years later won the Prix de Rome with a painting of Caius Gracchus, Summoned by the Senate, Leaves for Rome. He was a pensionnaire at the French Academy in Rome between 1841 and 1845, and it was during this period that Brisset painted a canvas of Saint Lawrence Displaying the Treasures of the Church that was much admired when it was exhibited at the Salon in Paris. On his return to France, Brisset assisted his teacher Picot on the frescoes in the Parisian church of Saint-Vincent-de-Paul, while later working independently as a mural painter in the churches of Sainte-Clotilde, La Sainte-Trinité, Saint-Roch and Saint-Augustin. Among his non-ecclesiastical commissions were murals for the Grand Théâtre in Geneva, executed in 1879 but destroyed by fire in 1951, as well as the Hôtel Matignon and the Hôtel de la Païva in Paris, while in 1883 he helped to restore the frescoes at Fontainebleau. In 1862 Brisset designed the 100 franc banknote for the Banque de France, a design which remained in use until 1923. Alao active as an art teacher, among his most famous pupils was Henri Gervex.Easel paintings by Brisset are today in the Ecole des Beaux-Arts in Paris, the Chateau of Versailles, the Musée de Art et d’Histoire in Narbonne, the Los Angeles County Museum of Art, and elsewhere, while some drawings by the artist are in the Musée des Beaux-Arts in Angers.