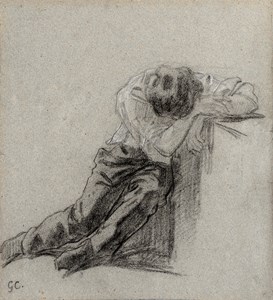 Born in Franche-Comté, Gustave Courbet began his career as a lithographer before turning his hand to painting at the end of the 1830s. While his earliest works were portraits and self-portraits, his modern reputation rests on the Realist paintings of peasants and workers that he painted in the late 1840s and early 1850s; works such as The Stone-breakers and A Burial at Ornans which have a strong political emphasis, and which caused a sensation when exhibited at the Salon of 1851. The massive canvas The Painter’s Studio, completed in 1855, was painted for the Exposition Universelle of 1855 but rejected by the jury; in response Courbet exhibited the painting and some forty others in his own private Pavillon du Réalisme close to the grounds of the Exposition. The later 1850s and the first half of the 1860s found Courbet working in a less overtly Realist vein, with his output dominated by landscape paintings, as well as still-life paintings and hunting scenes. Later in the 1860s, however, he returned to more radical subjects, in a handful of paintings that are characterized by a focus on social issues. Briefly imprisoned after the Commune of 1871, in which he was closely involved, Courbet spent the rest of his life in exile in Switzerland.Unlike many of his contemporaries, Courbet was not a prolific draughtsman. (In his 1978 catalogue raisonné of Courbet’s work, Robert Fernier lists just over sixty drawings by the artist, and relatively few sheets have been added to the corpus since then.) He seems to have drawn only occasionally, and indeed has been described as being somewhat averse to drawing; it is thought that his rejection of academic principles may also have led him to ignore the traditional emphasis placed on preparatory drawing, in favour of working directly in colour on the canvas. Nevertheless, he sometimes chose to exhibit selected drawings alongside his paintings at the Salons, and between 1845 and 1855 produced a number of large and highly-finished drawings, fully signed and dated, in charcoal and chalk.