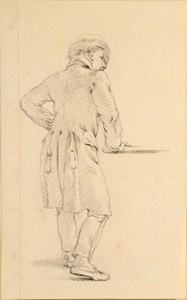 At the age of fourteen, Cornelis Kruseman began attending classes at the City Drawing Academy in Amsterdam, and his earliest exhibited paintings were genre scenes and religious subjects. As early as 1817 he was already working as a drawing instructor and is known to have had several pupils. Following a period of travel between 1821 and 1825, which found him working in Paris, Switzerland and Italy, he settled in The Hague. He was to remain there, for the most part, until 1854, although he spent several years working in Rome in the 1840’s. A painter of Biblical subjects, portraits, historical themes and genre scenes, Kruseman also produced a number of etchings and lithographs. In his day, he was regarded, alongside Ary Scheffer, as one of the leading painters of religious subjects in Holland, although only a handful of such paintings survive, and he is better known today as a portraitist. A portrait of Willem I painted in 1830 led to a knighthood for the painter, who spent much of the following decade working on an enormous painting, now lost, of a scene from the Belgian Revolution, The Battle of Boutersem. Another major painting, a Saint John the Baptist Preaching in the Wilderness commissioned in 1841 and completed in Rome in 1847, was poorly received by critics and the public. Kruseman exhibited his paintings in Amsterdam, Haarlem, The Hague, Leeuwarden and Rotterdam. A member of the Academy in Amsterdam, he was a popular teacher, and had a number of pupils. The sale of Kruseman’s estate in 1869 included a substantial number of drawings, though almost no early works dating from before the beginning of his travels in 1821. Drawings by Kruseman are today in the Rijksprentenkabinet in Amsterdam, the Fodor collection at the Amsterdam Museum, the Teylers Museum in Haarlem, the Kröller-Müller Museum in Otterlo, the Museum Boijmans-van Beuningen in Rotterdam, and elsewhere.