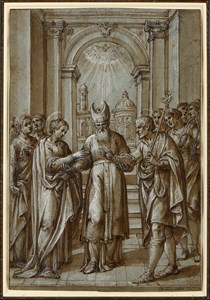 Among the less well-known exponents of the late Mannerist fresco tradition in Rome, Avanzino Nucci was a student of Niccolò Circignani, called Il Pomarancio. He is thought to have come from the small town of Gualdo Tadino, not far from Città di Castello, since a drawing by him in the Uffizi is signed ‘Avanzino Nucci da Gualdo’. Between 1595 and 1599 Nucci worked in Naples, where in 1596 he painted a fresco cycle depicting the history of the Carthusian order for the monastery of San Martino. He also worked with Belisario Corenzio at the church of the Annunziata in 1598. Upon his return to Rome, Nucci continued to receive commissions for altarpieces and frescoes, although very little of this work survives today. A Baptism of Constantine is in the church of San Silvestro al Quirinale, and old guidebooks mention paintings by Nucci in several other Roman churches, including Santa Maria in Aracoeli, Sant’Agostino, San Giuseppe dei Falegnami and San Marcello al Corso. A Virgin and Child with Saints, signed and dated 1620, is in Serrasanquirico, near Ancona. Avanzino Nucci’s distinctive draughtsmanship, with a preference for pen and ink with white heightening on blue or grey-green paper, led the scholar Philip Pouncey to assemble a group of some fifty drawings by the artist under the provisional name of the ‘pseudo-Bernardo Castello’, reflecting their superficial similarities with the drawings of that Genoese artist. In 1967, however, he was able to identify the artist on the basis of a preparatory study in Berlin for a figure in the San Silvestro altarpiece of The Baptism of Constantine.Pouncey’s attribution of this group of drawings to the gifted but little-known Nucci was typical of his pioneering approach towards the study of 16th century Italian draughtsmanship. Although he had planned to publish an article on Nucci’s drawings, it was never completed. A draft of the text survives, which begins: ‘The reconstruction of a minor figure in the field of Roman Mannerism may seem hardly worth the effort even to those who do not take the view that this is a chapter in the history of art that may be safely skipped. Judged by his artistic value, Avanzino Nucci (1551-1629) perhaps hardly deserves the shortest of short notices. But in art history, as in life, nuisance value is a factor to be reckoned with and it must be admitted that an artist like Avanzino who is not only prolific but is found competing or collaborating with more important painters is liable to prove a stumbling block to those who are not aware of his existence. It seems, in short, desirable that enough of his work should be published to enable the student of the period to isolate him from his Mannerist colleagues.’