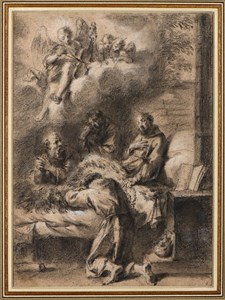 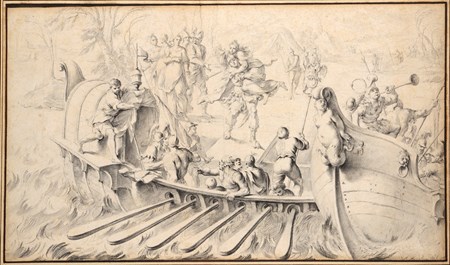 Trained in Bologna by a succession of minor painters, Aureliano Milani received his true artistic education from his close study of the Carracci. Gianpietro Zanotti, in his biography of the artist, noted that the young Milani made drawn copies after the works of the Carracci (‘a disegnare le opere de’ suddetti Carracci’), and in particular the frescoes of the Palazzo Fava in Bologna. Milani’s first datable work is an Annunciation in the convent church of Santa Maria dei Servi in Bologna, painted in 1705. Relatively few paintings survive from Milani’s early years as an independent artist in Bologna, however, of which the most important is an altarpiece of Saint Jerome and the Blessed Ghisilieri in the church of Santa Maria della Vita, painted around 1718. The following year Milani settled in Rome, where he was to work for the remainder of his career. He painted altarpieces for such churches as Santi Giovanni e Paolo and San Bartolomeo dei Bergamaschi and also undertook several important decorative projects, notably a fresco cycle of the Labours of Hercules for the vault of the gallery of the Palazzo Doria Pamphili, painted in 1732. He also painted a number of genre subjects, typified by a Market Scene in a Roman Square now in the Museo Civico in Pesaro.Milani’s drawings were highly praised by his biographers, both of whom noted that he had a better contemporary reputation as a draughtsman than as a painter. Zanotti admired the artist’s animated figures (‘uomini nudi, muscolosi, e terribili’) and diversity of subject matter, while Luigi Crespi noted of Milani that ‘He made many drawings, and in truth his drawings are equal to those of any great master, for their character, for their immediacy, for their magnificence, and for the ease of execution, with which they are touched, heightened and shadowed’.