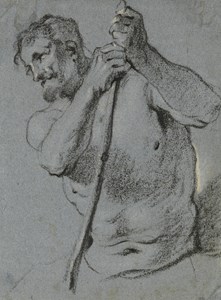 One of the few significant 17th century painters to hail from the town of Malines (Mechelen) in Flanders, Lucas Franchoys the Younger was born into a family of artists. He received his artistic training from his father, Lucas Franchoys the Elder, before entering the studio of Peter Paul Rubens in Antwerp in the late 1630’s. He became one of the most talented of Rubens’s followers, although his work also shows the distinct influence of Anthony Van Dyck. After Rubens’s death in 1640, Franchoys may have spent some time working in Paris for the Prince de Condé, although no firm evidence of such a trip survives. His first recorded commissions were received around the end of the 1640’s, for various churches and monasteries in Tournai; among these is an Annunciation in the cathedral at Tournai, which is dated 1649, and a Beheading of Saint John the Baptist, painted in 1650 for the church of Saint-Quentin and destroyed during the Second World War. Franchoys was back in Malines by 1654, and worked there until his death, establishing a successful career. Among his most significant commissions was a triptych of scenes from the life of Saint Roch, painted between 1669 and 1672 for the church of Saint-Jean-l’Evangeliste et Saint-Jean-Baptiste in Malines, as well as two canvases of The Preaching of Saint Peter and The Preaching of Saint Paul for the same church, completed in 1673. His most important patron was Alphonse de Bergues, the future archbishop of Malines, who commissioned several works from the artist for local churches and monasteries. Best known as a portrait and history painter, Franchoys was registered in the artist’s guild in Malines in 1655, and served as dean of the guild in 1663. He had several pupils in Malines, leading to the diffusion of Rubens’s style in the area.