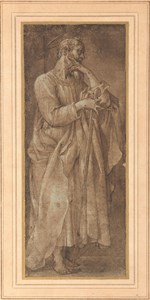 Giovanni Baglione was, according to his autobiography, a pupil of the minor painter Francesco Morelli, before working as one of the artists entrusted with the fresco decoration of the Scala Santa and the Vatican Library between 1588 and 1590. His first major commission was for a series of frescoes of scenes from the life of the Virgin for the Roman church of Santa Maria dell’Orto, completed in 1598; a project that established his reputation. Around 1600 he painted a fresco for the transept of the church of San Giovanni in Laterano, and soon after fell under the influence of Caravaggio. As a result his style changed quite dramatically, as evidenced by a painting of Divine Love Overcoming the World, commissioned by Cardinal Benedetto Giustiniani and completed in 1603. In the same year, however, Baglione sued Caravaggio and several other artists of his circle, including Orazio Gentileschi, for libel, accusing them of publishing poetry that defamed him, and from this point onwards his work became less overtly Caravaggesque. He continued to enjoy a highly successful career, underlined by the commission for an altarpiece for Saint Peter’s in 1604 and for frescoes in the Cappella Paolina at Santa Maria Maggiore, painted between 1610 and 1612. His lifelong Mannerist tendencies meant, however, that later in the 17th century his work was somewhat overshadowed by that of the younger generation of Bolognese artists arriving in Rome. The last years of Baglione’s long career were largely devoted to writing two major books; Le nove chiese di Roma, published in 1639, and the Le vite de pittori, scultori ed architetti, which appeared in 1642. The latter, a significant work of art history, contained over two hundred biographies of artists active in Rome between 1572 and 1642, and it is for this seminal work that Baglione is best known today.In his lifetime, Giovanni Baglione was much admired as a draughtsman. His extant drawings vary according to their function, with pen and ink mostly used for preliminary compositional sketches, black or red chalk for studies of individual figures, and pen and wash with white heightening for more finished modelli. As Maryvelma Smith O’Neil has written, ‘The most important trends in Baglione’s draughtsmanship in his full maturity (ie. c.1600-30) are the broader, freer handling and the versatility with which he used the technical means at his disposal. Though he often crossed over the line into the Baroque, the idealism he inherited from his Tusco-Roman education and fondness for angular lines constrained him, in his drawings, as in his paintings, from fully yielding to a dynamic disposition of figures.’