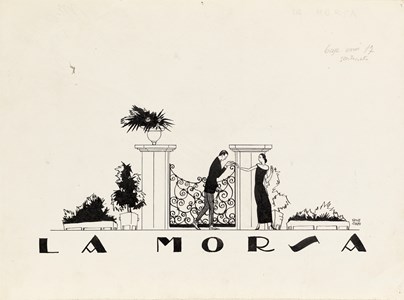 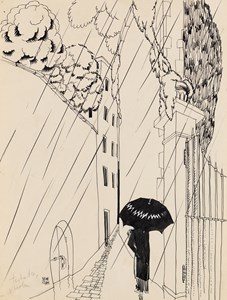 After completing his studies at the Accademia di Brera in Milan, Ubaldo Veneziani became known as a fashion illustrator, and his drawings appeared in several women’s fashion magazines. Active as a gifted painter, book illustrator and poster designer in the 1930’s and 1940’s, Veneziani eventually gave up a career in the advertising business to devote himself solely to art and design. Among his designs for book covers are several for the publishing house Edizioni Alpes in the 1920’s, such as Alberto Moravia’s Gli Indiffirenti, published in 1929. Veneziani also designed the covers for the first Italian editions of Théophile Gautier’s Ménagerie intime, published in Rome in 1928, and G. K. Chesterton’s The Napoleon of Notting Hill, which appeared in Milan a year later.