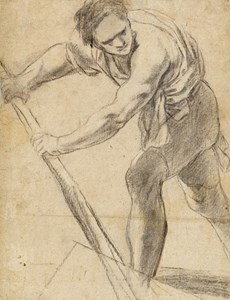 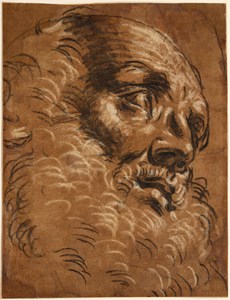 Giacomo Cavedone entered the Carracci academy in Bologna in 1591, studying initially with Annibale Carracci. After Annibale’s departure for Rome in 1595, Cavedone remained in Bologna, becoming one of Ludovico Carracci’s chief assistants. He continued to work with Ludovico until the latter’s death in 1619, collaborating on such projects as the decoration of San Michele in Bosco. Cavedone’s first known independent painting is a Saint Stephen in Glory of 1601, today in the Galleria Estense in Modena. In 1609 he travelled to Rome, where he assisted Guido Reni on the decoration of the Cappella Paolina in Monte Cavallo. The influence of this Roman sojourn, and particularly his exposure to the work of Caravaggio, is reflected in such paintings as The Baptism of Christ of c.1611-1612, in the church of San Pietro Martire in Modena. Cavedone painted several monumental altarpieces for churches in and around Bologna, and the effects of a trip to Venice between 1612 and 1613 can be seen in the painterly richness of works such as the large Sant’Alò altarpiece of 1614, now in the Pinacoteca Nazionale in Bologna. Having inherited the title of caposindaco of the Accademia degli Incamminati after the death of Ludovico Carracci, Cavedone spent the next few years of his career busy with commissions for frescoes, altarpieces and easel pictures. However, injuries sustained as a result of a fall from scaffolding in 1623, together with the loss of his wife and children to the plague of 1630, seems to have ended his career prematurely, and he produced very little work in the thirty years remaining before his death.Cavedone’s drawings display a distinctive combination of Venetian and Bolognese elements, with the particular influence of the draughtsmanship of Titian on the one hand and Ludovico Carracci on the other. His drawings may be divided into three main groups - compositional sketches, figure and drapery studies, and large studies of individual heads - and approximately half of his surviving drawings may be related to extant paintings. While his composition drawings were generally drawn in pen and ink wash, for figure and head studies he tended to use either a soft black chalk, usually applied on blue paper, or charcoal heightened with white chalk on light brown (and sometimes oiled) paper. (Cavedone’s drawings of this latter type were to be a strong influence on Guercino’s draughtsmanship.) The largest and most important single group of drawings by Cavedone, numbering just under seventy sheets, is in the collection of the Royal Library at Windsor Castle.