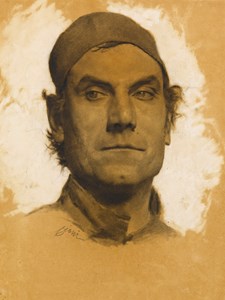 A student of Giuseppe Ciaranfi at the Accademia di Belle Arti in Florence in 1878, where he won a prize for painting, Cesare Ciani was also strongly influenced by the work of the Macchiaioli painter Giovanni Fattori, with whom he also studied. Fattori’s guidance is readily evident in Ciani’s landscapes, city scenes and portraits, confidently painted with broad, sketchy brushstrokes. Much of his work was devoted to scenes of daily life in his native city of Florence, and in particular the ‘oltr’Arno’ neighborhood of Borgo San Frediano, where the artist had his studio on the Via dei Serragli. Ciani exhibited his work regularly in Florence, and first exhibited in Paris in 1899, gaining an honourable mention. Two years after Ciani’s death a large retrospective exhibition of over 180 of his works was held at the Galleria dell’Accademia in Florence, while more recently an exhibition of the artist’s work was held at the Galleria La Stanzina in Florence in 1978. Several paintings by Ciani are today in the collection of the Galleria d’Arte Moderna at the Palazzo Pitti in Florence, while two self-portraits by the artist, one dating from the 1890’s and another painted shortly before his death, are in the Uffizi. A monograph on the artist was published in 1946.