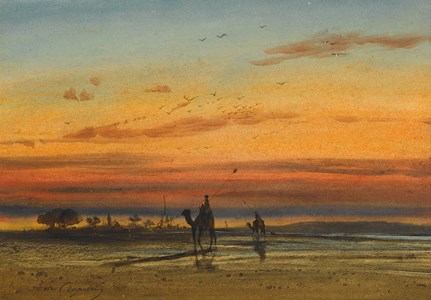 A pupil of Jean-Baptiste-Camille Corot, Louis-Amable Crapelet made his debut at the Paris Salon in 1846. Crapelet produced relatively few paintings, which were generally of an Orientalist nature. After spending some time in Algeria, he went to Egypt between 1852 and 1854, travelling down the Nile as far as the Third Cataract. This journey provided him with material for much of his later career. In 1859 he visited Tunis, and his drawings from this journey later served to illustrate an account of the voyage for the magazine Le Tour du Monde in 1865. In the same year he exhibited a View of Luxor at the Exposition Universelle in Paris. Crapelet exhibited mainly views of Egypt at the Salons between 1849 and 1866, as well as the occasional Italian and Provençal landscape. Towards the end of his career he also worked on the mural decoration of theatres and other buildings in Lyon and Marseilles.