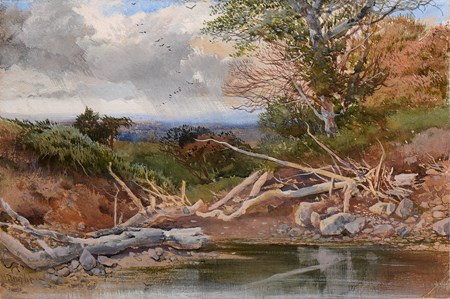 Relatively little is known of the early life and career of the landscape painter Henry Bright. A pupil of Alfred Stannard and John Sell Cotman, Bright is associated with the Norwich School of artists, although he lived and worked in London between 1836 and 1858, earning a living as an artist and a teacher of watercolour painting. Early in his life, between 1839 and 1844, he exhibited at New Society of Painters in Watercolours with some success, although over the course of his entire career he was not very prolific as an exhibitor. (The reason for this may perhaps be found in a comment he made in 1870; ‘I seldom exhibit I can sell all I do at a good price.’). Certainly, Bright seems to have enjoyed considerable success as a painter, with one of his works being acquired by Queen Victoria. He travelled extensively throughout Britain and the Continent, and was friendly with J. M. W. Turner (whom he sometimes accompanied on sketching expeditions), Samuel Prout and David Cox, while his work was also much praised by John Ruskin. He was also a popular and influential teacher, counting a number of wealthy and titled amateurs among his students, and in the 1840’s published manuals such as Bright’s Drawing Book and Bright’s Graduated Tint Studies. Bright exhibited for the last time in Norwich in 1871 and died, after an illness of several months, two years later. An obituary published in The Art Journal noted of the artist that ‘The subjects of Mr. Bright's pictures are very varied, but his manner of treating all shows great originality and a high degree of self-possession, while his manipulation is most broad and masterly, and his colouring rich and deep. With us his most attractive subjects are the banks of a stream, or a river, sometimes with a mill situated on them, and sometimes a group of noble trees, telling against a sky brilliant with the rising or setting sun.’ The contents of Bright’s studio were dispersed at auction in London in May 1874.An extensive and significant group of drawings and watercolours by Henry Bright is today in the collection of the Norwich Castle Museum, while other examples are in the British Museum, the Victoria and Albert Museum, Tate Britain and The Courtauld Institute Galleries in London, the National Maritime Museum in Greenwich, the Maidstone Museum in Kent, the National Gallery of Scotland in Edinburgh and the Royal Collection at Osborne House, as well as the Museum of Fine Arts in Boston, the Art Institute of Chicago, the Rhode Island School of Design in Providence and the Fine Arts Museums of San Francisco.