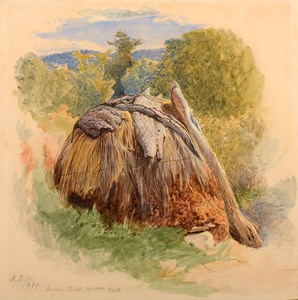 Born in Yorkshire, John Dawson Watson showed artistic promise at an early age. He studied at the Manchester School of Art from 1847 onwards, and then from 1851 at the Royal Academy in London. In the same year his first exhibited work, entitled The Wounded Cavalier, was shown in Manchester. In 1856 he came to the attention of Ford Madox Brown, who invited Watson to exhibit his work at his home in London. Settling in London in 1860, Watson began exhibiting at the Old Water-Colour Society and the Royal Academy. He was elected an Associate Member of the Society of Painters in Watercolours in 1864, rising to full membership five years later. Between 1859 and 1892 he exhibited over 370 works at exhibitions in LondonWatson’s oeuvre is made up largely of small oil paintings and highly detailed watercolours of historical and genre scenes, as well as the occasional pastoral subject, executed in a manner strongly influenced by the Pre-Raphaelites. Watson’s landscapes were much praised in particular by John Ruskin, while the early 20th century scholar Forrest Reid noted that he, ‘was a sound draughtsman whose work frequently surprises us by its power and beauty.’ Watson also produced numerous book and magazine illustrations, notably a series of drawings for John Bunyan’s Pilgrim’s Progress, published in 1861, as well as designs for furniture, medals and theatre costumes. The last years of his career were spent in Conway in North Wales, where he was engaged on a program of decoration for the Castle Hotel there. A large exhibition of Watson’s work was held in Manchester in 1877, and works by the artist are today in the Victoria and Albert Museum and elsewhere.