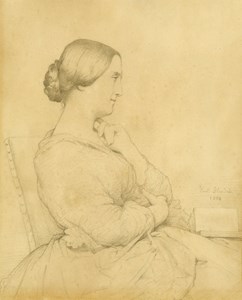 Like his better-known elder brother Hippolyte, Paul Flandrin studied at the Ecole des Beaux-Arts in Lyon before entering the studio of Ingres in Paris in 1829. The brothers were among the first pupils taken on by Ingres, and grew to be the master’s favourite students. Somewhat more shy and reserved than his brother, Paul Flandrin maintained a lifelong interest in landscape painting, and in particular the genre of the paysage historique, in which category he won a prize at the Ecole des Beaux-Arts in 1832. The same year Hippolyte won the Prix de Rome in the category of history painting, and left for Rome. Paul won the prize in the category of the paysage historique the following year, and joined Hippolyte in Rome in 1834. The two brothers remained in Italy until 1838, travelling extensively around Tuscany, Southern Italy and the Veneto. On their return to France in 1838, they shared a studio in Paris, with Paul helping his brother on the mural decoration of the church of Saint-Séverin in Paris. Paul Flandrin made his Salon debut in 1839, showing an Italian view, and began to develop his own reputation as a landscape painter. He also continued to assist Hippolyte on a number of the latter’s commissions for mural decorations for churches in Paris and elsewhere, completing the last of these after his brother’s death in 1864. Flandrin travelled widely throughout France, and landscapes of views in Provence, the Languedoc and Normandy were to make up the bulk of his Salon entries throughout his career. As late as 1875, when his paintings were already something of an anachronism alongside the more radical work of the Impressionists, Flandrin’s landscapes were praised by the critic Charles Clément as ‘distinguished in composition, so fresh, so elegant...conceived with such an elevated sentiment, and their lines are so knowingly balanced; despite their systematic and tight execution, they speak so deeply to the poetic sensibility.’