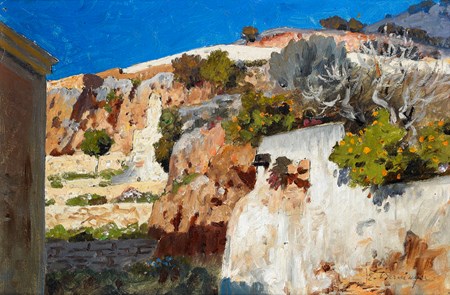 A landscape painter and watercolourist, Edmund Berninger was born in Thüringia and abandoned an early career as a pharmacist in favour of training as an artist in Weimar under Theodor Hagen. Settling in Munich in 1874, he then spent several years travelling around Europe, North Africa and the Near East. He produced paintings, oil sketches and watercolours of sites in England, France, Italy, the Netherlands, Greece, Constantinople, Egypt (where he is thought to have lived for several years), Palestine, Algeria and Tunisia. He painted views of Jerusalem and Cairo, as well as richly coloured landscapes and scenes of Oriental markets and caravans. Berninger also worked as an illustrator, and painted a number of large-scale public works in the form of panoramas (including Egyptian landscapes and battle scenes) and dioramas.