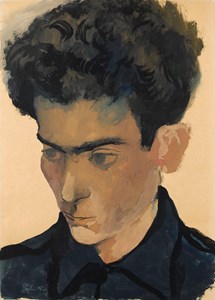 Born into an aristocratic family in Moscow, Pavel Feodorovitch Tchelitchev (or Tchelitchew) was educated by private tutors. In 1918 his family fled Moscow during the Bolshevik Revolution, settling in Kiev, where Tchelitchev attended drawing classes at the Kiev Academy. There he met and was encouraged by the set designer Alexandra Exter, and worked on stage sets and poster designs. Working in Berlin in the early 1920’s, Tchelitchev achieved a fair amount of success as a stage designer, designing the sets and costumes for productions such as Rimsky-Korsakov’s Coq d’Or, and also began painting portraits and still-lives. He came to the attention of the ballet impresario Sergei Diaghilev, who encouraged the young artist to come to Paris, where he settled in 1923. As well as exhibiting at the Salon d’Automne, Tchelitchev was included in a group exhibition at the Galerie Druet in 1926, alongside Eugène Berman, Christian Bérard and other artists who painted in a distinctive, dreamlike manner known as Neo-Humanism or Neo-Romanticism. Tchelitchev was given his first one-man exhibition at the Claridge Gallery in London in 1928, and the same year designed the costumes and sets for Diaghilev’s Ode. In 1934 Tchelitchev settled in New York, where his fantastical paintings of allegorical subjects gained considerable him attention. A one-man show at the Julien Levy Gallery in 1938 was followed four years later by an exhibition at the Museum of Modern Art, which acquired one of his best-known allegorical works, Hide and Seek, painted between 1940 and 1942. Tchelitchev’s works were collected by such prominent cultural figures as Gertrude Stein, Edith Sitwell (who described the artist as ‘tragic, haunted, and noble…one of the most generous human beings I have ever known’), Sir Kenneth Clark and Lincoln Kirstein, who published an early monograph on the artist’s drawings. From 1949 onwards Tchelitchev lived mainly in Rome, where he died in 1957, at the age of fifty-nine.Dame Edith Sitwell, who owned nearly forty drawings by the artist, praised Tchelitchev as ‘a transcendentally great draughtsman’, while his friend Lincoln Kirstein described him as ‘one of the most varied and memorable portraitists of his epoch.’