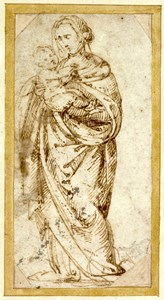 Born in Florence in 1483, Ridolfo Ghirlandaio was the son of the eminent painter Domenico Ghirlandaio. Following his father’s death in 1494, when he was just eleven years old, Ridolfo is thought to have continued his training with his uncle Davide, who had taken over the Ghirlandaio workshop. Vasari noted that Ridolfo also studied with Fra Bartolommeo, and indeed the influence of the latter is evident in much of his early work, as is that of Piero di Cosimo and Raphael, with whom Ridolfo was friendly during the latter’s stay in Florence. (Vasari writes that Ridolfo completed the blue robe of the Virgin in Raphael’s painting La Belle Jardinière, today in the Louvre.) Ridolfo soon gained a measure of independence within the Ghirlandaio bottega, and several paintings of the early 1500’s commissioned from Davide would appear to be by his nephew. His earliest documented painting, however, is a Virgin of the Sacred Girdle in the Duomo in Prato, commissioned from both Davide and Ridolfo in 1507 but largely the work of the younger artist and completed in 1509. As an independent artist, Ridolfo Ghirlandaio enjoyed a long and highly successful career, with a number of significant public commissions in Florence, including the fresco decoration of the Cappella della Signoria in the Palazzo Vecchio, begun in 1514, and two paintings of scenes from the life of Saint Zenobius for the Compagnia di San Zanobi, painted between 1516 and 1517. Ridolfo had a large and busy studio in Florence (where among his pupils was the young Perino del Vaga) and counted among his patrons members of the Medici, Antinori and Ricasoli families, among others. He produced altarpieces and frescoes for such Florentine churches as Santa Maria Novella, Santo Spirito and Santa Maria degli Angeli, as well as altarpieces for several towns outside Florence, and also enjoyed a particular reputation as a portrait painter.