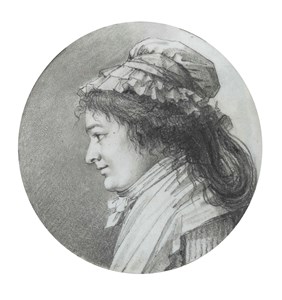 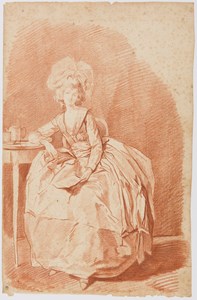 Active as both a genre and portrait painter, Louis-Roland Trinquesse was probably of Burgundian origins, and trained at the Académie Royale in Paris between 1758 and 1770. His earliest known dated drawing – a red chalk portrait of the painter Claude-Joseph Vernet - was executed in 1771, and his last in 1797. While his bucolic genre scenes and refined portraits in pencil and chalk proved popular with collectors, he twice failed in his attempts to be admitted to the Académie, and chose not to apply for a third time. He therefore exhibited mainly at the alternative Salon de la Correspondance, held between 1779 and 1787, although he did take part in the Salons of 1791 and 1793, which were open to all artists. As a genre painter, his particular penchant was for scenes of elegantly dressed, flirtatious young figures engaged in the pursuit of love, often set in a boudoir or a garden.It is as a draughtsman that Trinquesse is best known today. Edmond de Goncourt describes the artist as a ‘crayonneur à la sanguine qui a laissé un certain nombre d’etudes de femmes saisies d’après nature dans leur ajustement et leur accomodement du jour.’