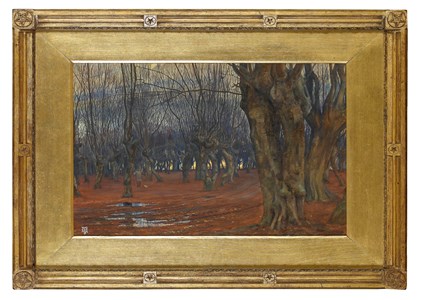 Tristram Ellis began his career as an engineer on the District and Metropolitan Railway in London, but around 1868 he decided to devote himself to working as an artist, leaving England in 1874 to train in the studio of Léon Bonnat in Paris. In 1878 he visited Cyprus, the first of an extensive series of travels throughout Europe, Asia Minor, the Middle East and North Africa. Visits to the Near East in 1879-1880, Egypt in 1881-1882, Portugal in 1883-1884, Greece and Turkey in 1885-1886 and Norway in 1894 resulted in a large number of landscape views in oil and watercolour. Ellis published several books about his travels, and also contributed illustrations to numerous books by other authors. In 1879 he published Twelve Etchings of the Principle Views & Places of Interest in Cyprus, followed two years later by On a Raft and Through the Desert: The Narrative of an Artist’s Journey Through Northern Syria and Kurdistan, by the Tigris to Mosul and Baghdad, and of a Return Journey Across the Desert by the Euphrates and Palmyra to Damascus, Over Anti-Lebanon to Baalbek and to Beyrout, illustrated with etchings after his drawings. Ellis produced watercolour views of Constantinople, Jerusalem, Egypt, Cyprus, Greece, Norway, Portugal, Russia and elsewhere. Elected an associate member of the Royal Society of Painter-Etchers in 1887, he exhibited regularly in London between 1868 and 1893; at the Royal Academy, the Grosvenor Gallery and the New Watercolour Society. In 1882 he published Views of Kensington Gardens and Hyde Park, followed the next year by Sketching from Nature: A Handbook for Students and Amateurs; a technical manual that set out many of his precepts of successful landscape draughtsmanship.