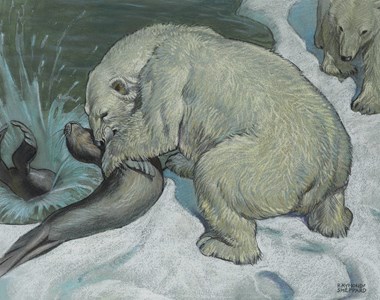 Primarily known as an illustrator for such publications as Lilliput, Picture Post and The Studio, as well as children’s literature, nature books and calendars, Raymond Sheppard was also a skilful painter of animals, landscapes, portraits and domestic scenes. During the Second World War he served in the photographic section of the Royal Air Force, and produced a number of drawings of aerial subjects. He was a founding member of the Wapping Arts Group, which set out to paint views along the Thames from the Pool of London to Blackwall and Rotherhithe. Sheppard’s use of materials was as varied as his output and he was equally adept in the use of chalk, watercolour, pastels and oil. A further curiosity is that Sheppard was not only a realist draughtsman but occasionally explored semi-abstract and surrealist themes as well. A member of the Zoological Society, Sheppard published such books as How to Draw Birds (1940), Drawing at the Zoo (1949) and More Birds to Draw (1956). He exhibited at the Royal Academy, the Royal Institution and the Royal Scottish Academy.Much of Sheppard’s graphic work survives in the form of books and illustrations but, due to his untimely death from cancer at the age of 45, his output as a draughtsman is less well known. He was particularly fond of depicting animals, and would often go to Regent’s Park Zoo to observe the animals and study them from life.