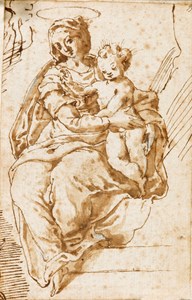 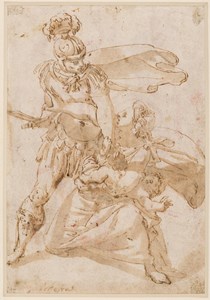 Marco Marchetti, known as Marco da Faenza after his birthplace, is best known as a designer and painter of grotesque decorations. The early years of his career were spent mainly in Rome, where around 1553 he decorated some of the rooms of the Palazzo Ricci Sacchetti. Giorgio Vasari writes that he was in great demand as a painter of grottesche, and praises his work very highly, as did the later biographer Giovanni Baglione, who described the artist as a ‘gran maestro’ in the field of decorative painting. By the mid-1550s Marchetti was working in Florence, where he executed an extensive series of grotesque decorations and ceiling paintings in the rooms of the Palazzo Vecchio, under the supervision of Vasari. The decorative grottesche of the rooms of the Quartiere degli Elementi in the Palazzo Vecchio are perhaps the finest manifestation of Marchetti’s work in this field. After a period in Rome, the artist returned to Florence to work with Vasari between 1564 and 1566 on the apparati to celebrate the marriage of Francesco de’ Medici, and was elected to the Florentine Accademia in October 1565. After some time working in Faenza and Rimini, Marchetti spent the latter part of his career in Rome, where one of his most important commissions was for the grottesche decoration of the Vatican Logge of Pope Gregory XIII, which he took over after the death of Lorenzo Sabatini in 1576. He was also active as a painter of religious subjects, including a series of paintings in the cloister of SS. Trinità dei Monti in Rome. Near the end of his life Marchetti seems to have settled in his native town of Faenza, where he worked on the decoration of the palace of the Cardinal Legate and in 1585 painted scenes from the life of Saint Francis for the monastery of the Osservanti. Drawings by Marchetti are relatively scarce and, as they can only rarely be connected with known works, are often difficult to date. The largest number of drawings by Marchetti is in the collection of the Uffizi in Florence, while a small but significant group is in the Louvre in Paris.