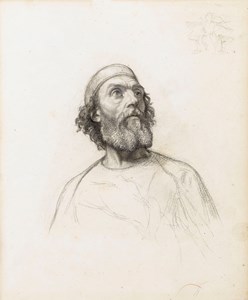 The son of a minor painter and art dealer, Hippoltye (known as Paul) Delaroche entered the École des Beaux-Arts in 1816, studying first with the landscape painter Louis-Étienne Watelet before eventually joining the atelier of Antoine-Jean, Baron Gros. He made a successful debut at the Salon of 1819, where he exhibited paintings of religious subjects, but by the end of the 1820’s had begun depicting subjects from French and English history. Over the next fifteen years, he consolidated his reputation as the foremost history painter in Paris, contributing regularly to the Salon exhibitions and often depicting events from modern, rather than classical history. After 1837, however, he no longer exhibited at the Salons, preferring for the most part to work outside official circles. Much of his later career was taken up with religious painting and portraiture, and with the public commission for the enormous Hemicycle in the auditorium of the Ecole des Beaux-Arts; a vast mural depicting seventy artists from Antiquity to the 18th century which took Delaroche more than four years to complete. The last years of Delaroche’s career were mainly devoted to paintings of religious subjects. Having inherited Gros’ studio upon becoming a Professor at the Ecole des Beaux-Arts in 1833, Delaroche enjoyed a reputation as a gifted teacher until his retirement in 1843; among his pupils were Thomas Couture, Jean-Léon Gérôme, Jean-François Millet and Ferdinand Heilbuth.