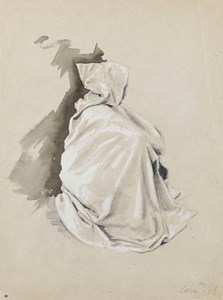 Caran d’Ache is the pseudonym of the French satirist and political cartoonist Emmanuel Poiré, who adopted the name from the Russian word karandash, meaning pencil. Born to French parents living in Russia, he settled in France after the death of his father in 1877. Active as a painter and draughtsman of military subjects and as an illustrator, he first came to attention with his drawings on military themes for the periodical La Chronique Parisienne, published under the name ‘Caporal Poiré’. It was as a cartoonist, however, that Caran d’Ache really came into his own. Beginning around 1866 and continuing over the next twenty years he submitted satirical drawings and caricatures to such popular publications as La Vie Moderne, L’Assiette au Beurre, Rire, La Vie Parisienne, Le Canard Sauvage, Caricature and Le Chat Noir. At the cabaret associated with the last of these periodicals he also produced a shadow play, as Camille Pissarro noted in a letter to his son: ‘I might mention that I have been invited to the opening of Chinese shadow-plays…The show will take place in the “Chat Noir” in about a week. You have heard of the author: Caran d’Ache. I was at John Lewis Brown’s and I was introduced to M. Caran. He is a very elegant young man, quite unusual, with a somewhat Russian manner, full of that wit which brings such speedy and complete success in Paris.’ Caran d’Ache also contributed to magazines in Germany, Switzerland and England, including Punch. Together with Jean-Louis Forain, he also founded a weekly satirical magazine of his own, entitled Psst!. He illustrated a number of books, and also published several albums of his humorous drawings.