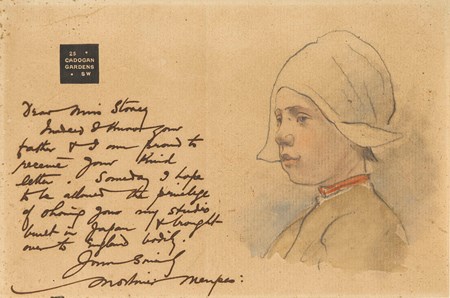 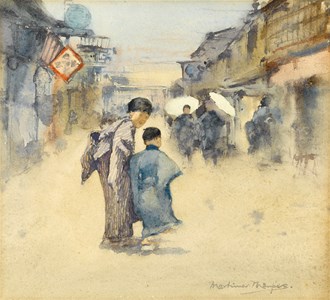 Born in Australia, Mortimer Menpes settled in London in 1879, studying at the South Kensington Schools. He also travelled through Europe, spending some time at Pont-Aven in Brittany. In 1881 he met James McNeill Whistler, and offered him the use of his large studio in which to complete his set of Venice etchings. Menpes soon afterwards abandoned his studies to work, alongside Walter Sickert, as Whistler’s studio assistant and disciple. He began exhibiting at the Royal Academy in 1881 and, largely as a result of his association with Whistler, was invited to show at the more avant-garde New English Art Club in 1886. In 1887 Menpes travelled to Japan, one of the first modern Western artists to do so. When he came to exhibit his Japanese paintings in London his refusal to sign himself as a pupil of Whistler caused the two artists to fall out, a situation only exacerbated by Menpes’s elopement with Whistler’s mistress. Menpes was never to be reconciled with Whistler, and was not invited to exhibit with the New English Art Club again. Nevertheless he continued to show at the Grafton Gallery in the 1890’s and at the Fine Art Society in the early years of the 20th century. Apart from Japan, Menpes travelled widely throughout Europe, and also visited Egypt, Morocco, India, Burma, Mexico and South Africa.