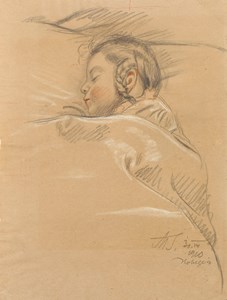 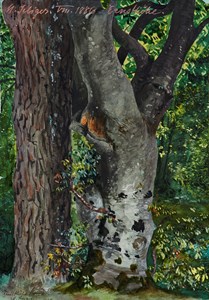 Born in Bublitz in Pomerania (now Bobolice in Poland), Max Seliger was active as a painter, decorator and mosaicist, although he remains little known outside of Berlin and Leipzig, where he worked for most of his life. (That he travelled abroad is, however, known from a watercolour view of Florence, dated 1898, which appeared at auction in 1993.) In 1893 Seliger was commissioned to decorate the façade of the German pavilion, the Deutsches Haus, at the World’s Columbian Exposition in Chicago. Another significant public commission was for a series of mural paintings to decorate the former Royal Gymnasium, or school, in the town of Wurzen in Saxony. Seliger also established a particular reputation as a designer of mosaic decorations. These include a series of mosaics painted for the Kaiser Wilhelm Memorial Church in Berlin in 1903-1904, while on a more intimate scale is his mosaic on the tomb of his nephew Fritz Dernburg, who died as a child, in the Berlin cemetery of Grunewald, which was completed in 1895.Seliger also worked as an illustrator and graphic artist, providing a design for the title page of the December 1898 issue of the Kunstgewerbeblatt, depicting Dürer’s Self-Portrait Adored by the Personification of Art. His most significant role, however, seems to have been as a teacher. Between 1901 and his death in 1920 Seliger served as the director of the Königliche Akademie für graphische Kunst and Buchgewerbe (the Royal Academy of Graphic Arts and Printing) in Leipzig, where painting and drawing were taught alongside bookbinding, lettering, typography and printing techniques. In 1924 his book Handschrift und Zeichnung von Künstlern alter und neuer Zeit was posthumously published; this illustrated a collection, assembled by Seliger, of examples of various artists’ handwriting and drawing on single sheet. (As part of his teaching, Seliger was interested in the relationship between an artist’s handwriting and the way in which he drew, and to this end asked numerous artists of his day to provide him with examples of both their writing and drawing on a single sheet of paper. He eventually amassed a collection of 236 examples, which is today in the Altona Museum in Hamburg.) Among the relatively few works by Seliger in public collections are ten drawings in the Kunstbibliothek in Berlin for the mosaics of the Kaiser Wilhelm Memorial Church, while a group of landscapes, urban views and portraits by the artist have recently been acquired by the Stadtgeschichtliche Museum in Leipzig from the collection of local collector Armin Hüchelheim.