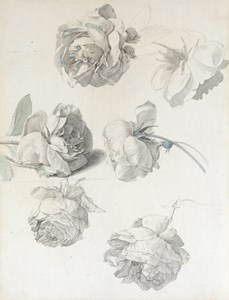 Arguably the most important flower painter in France in the first half of the 19th century, Antoine Berjon worked mainly in his native Lyon. He is regarded as the founder and leading exponent of the Lyon school of flower painters; a particular speciality that traced its origins to the 18th century silk manufacturies in the city. The early years of Berjon’s career were spent as a fabric designer in the Lyonnais silk industry, though by 1791 he had made his debut at the Paris Salon, exhibiting three floral still lives and a pastel drawing of fruit and flowers. Berjon lived in Paris between 1793 and 1810, working as a still life and portrait painter, but in 1810 returned to Lyon. There he was appointed a professor of floral design and painting at the recently founded École des Beaux-Arts, established by Napoleon in 1807 ‘to give tuition to artists whose talents will be devoted mainly to the silk industry’. He continued to send still life paintings to the Salons in Paris until 1819, and also exhibited occasionally in Lyon. Although best known as a flower painter, he also painted portraits in oil and pastel and worked as a miniaturist and printmaker. Apparently a somewhat difficult character, Berjon resigned from his post at the École des Beaux-Arts in Lyon in 1823, though he continued to teach privately. He spent the last two decades of his life as something of a recluse, and produced a large number of drawings, only a few of which were sold. A few years after his death, several of his drawings of flowers were reproduced and published as a suite of twenty-six lithographs by the firm of Grobon Frères in Lyon. Significant groups of drawings by Berjon are today in the collections of both the Musée des Beaux-Arts and the Musée Historique des Tissus in Lyon.