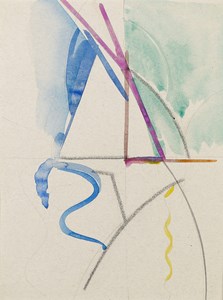 One of the leading documentary filmmakers of the 1930’s and 1940’s, Humphrey Jennings was born in the Suffolk fishing village of Walberswick in 1907. After completing his studies at Cambridge, where he designed sets and costumes for a number of amateur theatrical productions, he continued to work as a stage designer and began also to paint. In 1934 he began working as a director of short documentary films at the GPO Film Unit in London. In 1936 Jennings joined André Breton, Herbert Read and Roland Penrose on the Organizing Committee of the International Surrealist Exhibition held at the New Burlington Galleries, and became a founder member of the anthropological movement known as Mass Observation. With the outbreak of war, Jennings continued to work for the GPO Film Unit, now under the direction of the Ministry of Information, creating such inspirational documentary films as London Can Take It, Heart of Britain and Words for Battle. Later in the war Jennings scripted and directed the films Fires Were Started, about the National Fire Service, and The Silent Village, about the massacre of the citizens of a Czechoslovakian village by German troops in 1942. In July 1943 he filmed the invasion of Sicily, and in 1944 wrote and directed a documentary film on the song Lili Marlene. At the end of the war he traveled throughout Germany shooting a film about life in the country under the Military Government, released in 1945 as A Defeated People. Jennings’s postwar films included The Cumberland Story, a depiction of the mining industry, and Dim Little Island, about life in postwar Britain. He died in 1950 from a fall, while scouting locations for a new film on the Greek island of Paros, and is buried in Athens.Although best known as a filmmaker, Jennings was also active as a painter, draughtsman, photographer and poet. As an old friend, writing shortly after Jennings’s untimely death, noted of him, ‘He always regarded himself as, before everything, a painter; film-making was of secondary importance and the writing of poems an occasional mode of expression; and it is significant that Humphrey himself said, early last year, that he had just begun to be sufficiently satisfied with his work to feel that the time had come for an exhibition. He had mastered his style.’ As early as 1929, before he had started working at the GPO Film Unit, Jennings had written in a letter to his wife, ‘I should hate doing films really…simply I want to draw.’ In 1937 a one-man exhibition of his paintings was held at the London Gallery.