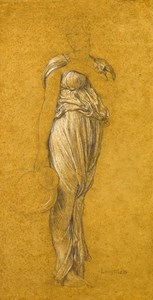 One of the leading figures of the art establishment in Victorian London, the painter and sculptor Frederic Leighton studied in Germany and lived for some time in Rome and Paris. His first exhibited work, a massive canvas depicting Cimabue’s Celebrated Madonna Carried through the Streets of Florence, was a critical and popular sensation at the Royal Academy exhibition of 1855, and was purchased by Queen Victoria. His reputation firmly established, Leighton was elected an Associate of the Royal Academy in 1864 and an Academician four years later. He rose to a position of considerable prominence in the Victorian art establishment. Appointed President of the Royal Academy in 1878, Leighton was raised to the peerage as Baron Leighton of Stretton in 1896, shortly before his death.