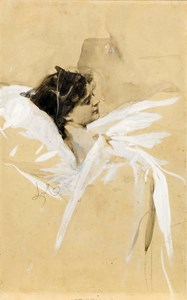 Ludek Marold began his studies at the Academy of Fine Arts in his native Prague in 1881, at the age of sixteen, but not long afterwards was expelled from the school for indiscipline. He transferred to the Akademie der Bildenden Künste in Munich, where he remained for five years and where, according to his later manuscript autobiography, all he studied was good beer. Nevertheless, while in Germany he joined an association of Czech artists and began providing illustrations for such periodicals as the German picture magazine Fliegende Blätter and the Czech publication Zlatá Praha. On Marold’s return to Prague in 1887 he continued his studies at the Academy, and at the same time painted large decorative panels for the interiors of a patisserie and a wine cellar in the city. The following year he exhibited a genre scene, The Egg Market in Prague, to considerable praise. In 1889 Marold received a grant to study in Paris, and he was to remain there until 1897. It was in Paris that he earned a particular reputation for his scenes of fashionable and aristocratic society, seen both in the subjects of his relatively few paintings and, more importantly, as reproduced in such popular publications as La Revue Illustré and Le Monde Illustré. It was these works that proved an inspiration to Czech artists of the succeeding generation. As one modern scholar has written, Marold ‘very quickly achieved considerable success as an illustrator who could add lightness and charm to illusionistic naturalism. His younger compatriots admired his technique: the way he seized fleeting instants of day-to-day existence showed presence of mind and the sharp awareness of a photographer, as well as penetrating psychological insight. His contemporaries said that they could almost hear his figures speak, and understood perfectly what they were saying.’ By 1891 the artist was earning a monthly income of up to 1,300 francs for his illustrations. Marold also enjoyed a successful career as a book illustrator - providing images for over fifty books by such authors as Alphonse Daudet, François Copée, Alexandre Dumas fils, Goethe, Pierre Louys, André Theuriet and the Goncourt brothers - and it was for his work as an illustrator that he won a gold medal at the Universal Exposition in Munich in 1892. He also designed a large number of advertising posters for the Parisian firm Lemercier, for which he again received much praise, while in 1895 he produced posters for the Empire of India exhibition at Earl’s Court in London. Marold’s most famous work, however, reveals his intention to broaden his scope beyond illustration and to focus on painting, and in particular painting of a grander nature. This was the huge circular panorama of The Battle of Lipany, painted in 1898 for an exposition in Prague. It was to be his last work, however, for the artist died in December of that year, at the age of only thirty-three. His death was greatly mourned in Prague, Paris and elsewhere; indeed, Gustav Klimt is said to have described Marold as one of the finest artists of the day.