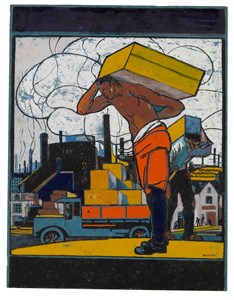 Born in Poland, Aaron Wolmark settled with his family in England in 1883, at the age of six, and grew up in the East End of London. In 1894 he entered the Royal Academy Schools, adopting the name Alfred by which he would be known for the rest of his life, and winning a medal for drawing in 1897. His first one-man exhibition was held at the Bruton Gallery in London in 1905, and was made up largely of scenes of Jewish life in the East End of London and family portraits. By 1910, however, Wolmark had abandoned Jewish subjects in favour of a more robust, and more colourful, Post-Impressionist manner. His work was included in Roger Fry’s International Society of Artists exhibition at the Grafton Gallery in 1910, where a painting by Wolmark was hung next to a canvas by Van Gogh, a matter of considerable pride to the artist in later years. In 1911 he married and spent his honeymoon in the Breton town of Concarneau; the vibrantly coloured paintings from this stay were exhibited at the Grafton Gallery later that year. Wolmark’s paintings are characterized by a bold application of paint, dominated by heavy impasto (leading Sickert to complain of his work that ‘you cannot see pictures for the paint.’) In 1913 Wolmark met Henri Gaudier-Brzeska, who modelled a bronze bust of the young artist, and the two remained close friends. He visited New York in 1919, soon after the end of the First World War, and his paintings of the city were exhibited at the Kervorkian Gallery there in 1920. While Wolmark had enjoyed a modest degree of success before the Second World War, and continued to exhibit occasionally in London after it, his reputation fell into decline long before his death in 1961 and was only revived in the 1970’s by a new scholarly and critical appreciation of his work.A gifted portraitist, whose sitters included Thomas Hardy, Aldous Huxley and G. K. Chesterton, Wolmark was also active as a graphic designer, producing book illustrations and posters, as well as undertaking work on costume and stage designs for two Diaghilev ballets in 1911, a set of abstract designs for the stained glass windows of the church of St. Mary’s in Slough in 1915 and a selection of decorative pottery for an exhibition the following year. His work is today found in the collections of the Tate, the National Portrait Gallery and in several provincial museums in Britain, as well as the Tel Aviv Museum.