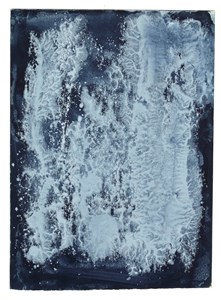 Kathleen Maltby entered the Slade School of Art in 1921, studying under Henry Tonks, and three years later won a scholarship to the Royal Academy Schools. She married the artist Robin Guthrie in 1927, and moved with him to America in 1931, where he was appointed director of the School of Fine Art in Boston. During this time she was given her first one-man show at the Grace Horne Gallery in Boston, in 1932, exhibiting New England landscapes and narrative scenes, painted in a deliberately naïve, folk art-like manner. The same year the Guthries returned to England and settled in Sussex, where Kathleen continued to paint in a simplified style, working in both oil and gouache. Unfortunately, the Guthries marriage was becoming strained and would soon lead to divorce. Although she continued to work, exhibiting at the Royal Academy and the New English Art Club, relatively few paintings by Guthrie survive from this period. In 1941, following her divorce, she married the abstract painter Cecil Stephenson. After the war, she began exhibiting at the Women’s International Art Club and the Hampstead Artist’s Council in London. A second solo exhibition, at Wolf Mankowitz’s Little Gallery in London in 1948, was made up of landscapes and charming genre scenes, and attracted the attention of such collectors as Sir Kenneth Clark. This was followed in 1951 by a show at the Crane Gallery in Manchester. At this time Guthrie produced silkscreen prints and textile designs, as well as writing and illustrating a number of children’s books.By the late 1950’s, inspired by the work of Stephenson (and also perhaps by some textile designs she had produced earlier in the decade) Guthrie had begun moving towards pure abstract compositions. Both Guthrie and Stephenson were members of the Free Painters, an association of mostly abstract artists, and in 1963 she exhibited the first of her abstract works in a one-man exhibition at the New End Gallery in Hampstead. One critic noted that ‘[Guthrie] has achieved a reputation as a painter of innocent-eye scenes. Her latest pictures, however, offer lyrical colour, jewel-strung or isolated complexes, against divided blue backgrounds. They have a luminous quality and joyous beauty.’ While she enjoyed working in a poetic, abstract idiom, she also continued to paint figurative subjects and the occasional landscape. From the 1960’s onwards, she began producing gouache sketches as a means of developing ideas for her larger paintings in oil or acrylics, although as one scholar has noted, ‘Comparing preliminary sketches with the finished work, it can be seen that occasionally the spontaneity which was an important element in her work could be lost.’ Following Stephenson’s death in 1965, Guthrie began to travel around Scotland and Wales, producing landscape sketches that often explore the abstract qualities of a particular view.A large retrospective exhibition of Guthrie’s paintings, at the Drian Gallery in London in 1966, included both abstract and figurative compositions. The exhibition elicited a number of positive reviews, with one critic writing, ‘There is…a sense of calm in many of her pictures, a quality which is reflected in her abstracts. This later work makes the most profound impression, with its regard for the subtle play of light and thoughtful colour combinations. It presents a sense of inevitable resolution, a gentle form of abstraction…’, while another review noted of Guthrie that ‘Her perception of feeling and acute colour sense is distilled from the naïve charm of early work into the pure light and shadow of her recent work.’ Although suffering from arthritis, high blood pressure and angina, Guthrie continued to paint both abstract and naturalistic subjects, and to exhibit in group shows and solo exhibitions at regular intervals, until her death, on a sketching holiday in Shropshire, at the age of 76.