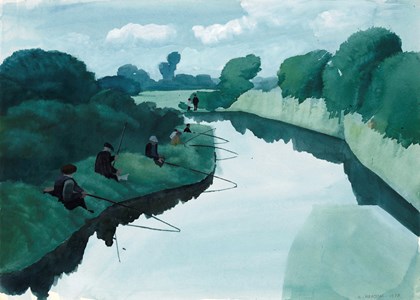 Born on a farm near Redditch in Worcestershire, where he was to live and work throughout his life, Norman Neasom studied at the Birmingham College of Arts and Crafts between 1931 and 1935, learning the art of watercolour from Bernard Fleetwood-Walker. He went on to teach painting for over thirty years, first at the Birmingham College of Art and later at the Redditch School of Art, before retiring in 1979. Working primarily in the medium of watercolour, Neasom painted landscapes in England and Wales that have been aptly described as reflecting ‘a benign, pastoral vision in a deeply English tradition.’ His work was exhibited at the Royal Academy, the Royal Watercolour Society (to which he was elected in 1978), the Royal Birmingham Society of Artists and elsewhere. After his retirement from teaching, Neasom produced a number of book illustrations, maps and cards, and also published several illustrated articles in the magazine Leisure Painter. In an interview at the time of his first exhibition in his native town of Redditch in 2003, Neasom noted that ‘I paint from my feelings, rather than being objective and copying what I see. I make a lot of initial drawings and have a lot of notebooks where I write down the facts about what I’m painting as well as my reactions to it…I like painting landscapes, I like painting people, and I like painting landscapes with people in them.’ Neasom’s watercolours were hugely popular with collectors, and examples are today in the collections of Her Majesty the Queen, the Birmingham Museum and Art Gallery, the Royal Watercolour Society and the West Midlands Arts Council, among others. The artist died in 2010, at the age of ninety-four.