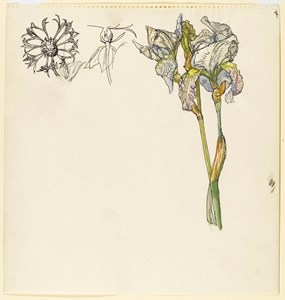 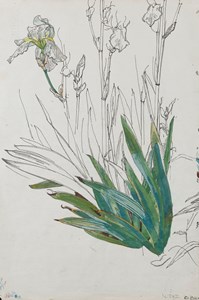 Born in 1903 to a family of modest means, Cyril Mahoney defied his parent’s wishes to pursue a career as an artist. After attending the art school at Beckenham he went on to win a scholarship in drawing to the Royal College of Art in 1922. (It was here that he met his lifelong friend Barnett Freedman, who renamed him Charles, and it was by this name that he was to be known for the rest of his life.) The Royal College of Art was to play an enormous role in Mahoney’s life and it was the College’s Professor of Painting William Rothenstein who was the first to encourage him as a draughtsman. As Mahoney’s daughter Elizabeth later recalled of her father, ‘Drawing…he believed to be a vital basic skill which underpinned other disciplines and which would be of use whether an artist worked figuratively or otherwise.’ It was also at the Royal College that Mahoney he developed a particular interest in mural painting and stage design. He went on to devote his career to a combination of painting, drawing and teaching, and by 1928 had returned to the Royal College of Art as a tutor. Mahoney received several commissions for mural decorations, and exhibited occasionally at the New English Art Club and, in later years, at the Royal Academy. In 1940 the Royal College of Art and its staff were evacuated to Ambleside in the Lake District, and it was there that he met Dorothy Bishop, a calligraphy teacher, who became his wife. In 1953 Mahoney left the College and went on to teach at various schools, before joining the Royal Academy School. It was not until 1961, however, become an Associate of the Royal Academy, having turned down an earlier offer of membership as he felt it was undeserved.In 1937 Mahoney bought Oak Cottage in Wrotham, Kent, and this provided him with the perfect setting to explore his other great love, namely plant life and gardening. This was the first time he had his own garden and he relished being able to grow and study a large variety of plants and flowers. Mahoney was an amateur botanist and would swap notes and cuttings with friends, and this scientific approach can be detected in all of his plant sketches. In 1937 he and his friend Evelyn Dunbar published a book entitled Gardener’s Choice, where he was responsible for the full-page illustrations. According to the artist’s wife, ‘Charles delighted in plant life, its richness, strength, grandeur, colour, form and infinite textural qualities…[he] showed uncompromising vigour in recording the structure, detail and above all the total feeling of the plant, each growing and bearing fruit in its particular way. Nature came to dominate all of Mahoney’s paintings and murals, regardless of their subject matter.Mahoney died in 1968 after battling with emphysema. At his memorial service Sir Thomas Monnington fittingly said of the artist, ‘he found in nature the manifestation of his belief in an ultimate or superior order, and I think he tried to confirm this belief in his honest attempt, to translate this reflection of ultimate truth he found in nature, into the simplest terms of painting and drawing.’