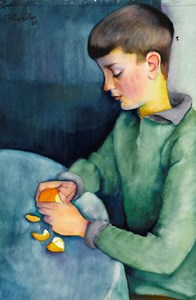 Born in Dresden, Konrad Felix Müller studied music at the Royal Conservatory and took drawing lessons at the Applied Art School in the city. He also seems to have taught himself the basic techniques of printmaking before being accepted into the Royal Academy of Art in Dresden at the end of 1912. His first oil paintings date from 1913, and in the same year he produced a series of woodcuts in a distinctively Expressionist manner. By 1915 the young artist had taken to calling himself Conrad Felixmüller, and had embarked on an independent career in Dresden. He spent some time in Berlin, where he briefly shared a studio with the artist Ludwig Meidner, and also contributed to Herwarth Walden’s avant-garde magazine Der Sturm. Soon established as a leading member of the second generation of Expressionist artists In Dresden, Felixmüller was associated with a group of progressive artists and writers in the city. A conscientious objector, he repeatedly ignored his military draft orders and was eventually arrested and conscripted into the army as a hospital orderly. Marriage in 1918 and fatherhood the same year inspired a new interest in domestic themes, the result of the contentment he found in family life. A burst of activity as a painter, printmaker and illustrator, as well as experiments in sculpture and stage design, found Felixmüller exhibiting his work in Berlin, Dresden and Hanover, while several portfolios of his engravings, etchings and woodcuts were published. By the middle of the decade, however, there began to be a pronounced change in the Felixmüller’s style, with the Expressionist tendencies of his work of the late teens and early 1920’s eventually giving way to a brighter, more naturalistic manner. This break was codified in 1929 in an article written by Felixmüller for the magazine Kunst und Künstler, entitled ‘Malerglück und Malerleben’ (‘Painter’s Happiness and Painter’s Life’), in which the artist gave notice of his break with Expressionism. His paintings and drawings began instead to focus on a more private and optimistic approach to subject matter and mood, with a particular emphasis on depictions of domestic life. Nevertheless, during the years of Nazi rule, Felixmüller found his work labeled as ‘degenerate’ and struggled to work freely. A former member of the German Communist Party, he was excluded from official artist’s organizations, and between 1937 and 1938 some 150 of his works which were in public collections were confiscated by the Reich and either sold or destroyed. After the war Felixmüller continued to work as a painter, printmaker and illustrator, although living in East Germany he remained isolated from avant-garde trends in the West. He taught drawing and painting at Martin Luther University in Halle and later settled in East Berlin, working in relative anonymity before he and his wife were allowed to move to West Berlin to join their sons in 1967. In the years before his death ten years later his graphic work in particular began to earn the artist a considerable reputation outside Germany.