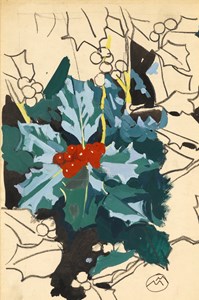 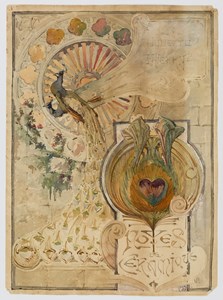 A Breton painter, Mathurin Méheut studied at the Ecole des Beaux-Arts in Rennes, from which he graduated at the age of twenty. He completed his studies at the Ecole des Arts Décoratifs in Paris and with the designer and decorator Eugène Grasset, while at the same time as contributing to the magazine Art et Décoration. In 1904 he provided illustrations for the book Fantôme de Terre-Neuve by Léon Berthaut, the first of several books he worked on throughout his career, and in 1906 began exhibiting regularly at the Salon des Artistes Français. Although Méheut settled and established his career in Paris, he returned frequently to Brittany, working at Douarnenez, Quimper, Roscoff, Paimpol and elsewhere in the region. Between 1910 and 1912 Méheut worked at the marine biology station in Roscoff, alongside naturalists, and his illustrations resulted in the publication of a book, Etude de la mer, flore et faune de la Manche et de l’Océan and the exhibition of some 450 drawings at the Musée des Arts Décoratifs in Paris in 1913. The artist also travelled extensively outside France; visiting Turkey, Crete, Egypt and Syria, as well as even further afield, to New York, Hawaii and Japan, a trip cut short by the outbreak of the First World War. After serving in the army, Méheut returned to working in Brittany, and in 1921 a second exhibition of his work at the Musée des Arts Décoratifs included scenes of military life, as well as views of Brittany and Japan. Throughout his travels, Méheut was interested in recording the appearance of the peoples, sites, animals and plants of the places he visited. A member of the Académie de la Marine, Méheut achieved considerable success and was appointed official painter to the Marine Department in 1921. In 1924 he began to decorate commercial passenger ships and ocean liners, and the same year painted murals for the Villa Miramar on the Côte d’Azur for the banker Albert Kahn. An exhibition of his work was held at the Galerie Charpentier in Paris in 1928. Méheut spent three months in America in 1930, where he painted a mural decoration on the theme of the discovery of the New World for the Heinz residence in Pittsburgh. In 1934 he participated in the decoration of the luxurious French ocean liner, the SS Normandie. Méheut was active as a decorative mural painter, book illustrator, tapestry designer, stained glass painter and, not least, a ceramic painter, working at the Sèvres manufactury and for Villeroy and Boch. Later in his career he completed a series of celebrated illustrations for Florian Le Rioy’s book Vieux métiers bretons. The largest extant collection of the artist’s work is today in the Musée Mathurin Méheut in Lamballe, established with works donated by the painter’s daughter Maryvonne.