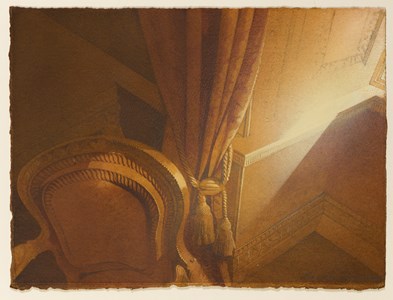 Born in Edinburgh, Hugh Buchanan studied at the Edinburgh College of Art, from which he graduated in 1980. He has made a particular specialty of watercolour views of the interiors of stately homes and historic buildings in England, Scotland, France and throughout Europe, some of which can be quite large in scale. Buchanan has received commissions from the National Trust, the Houses of Parliament and the Prince of Wales, for whom he painted a series of views of the interiors of Balmoral in 1987 and Highgrove House in 1994.Buchanan’s watercolours are drawn on heavy paper which can hold the many successive washes he applies to the surface of the sheet to achieve a sense of depth. His work is characterized by a strong sense of atmosphere, allied to an abiding interest in the forms of classical domestic architecture as seen in diffused light. As A. N. Wilson has written of the artist, ‘Hugh Buchanan’s paintings do not merely depict, they inhabit an architecture. You feel yourself in these rooms and houses which he has, over thirty years, so incomparably evoked. You feel yourself inside, not merely particular spaces, but in those spaces as first conceived by the great architects who designed them.’