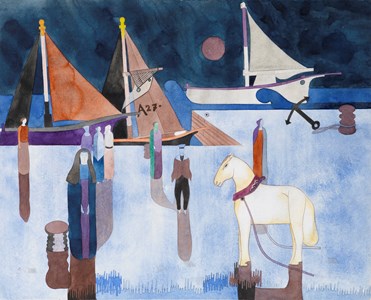 A painter, stained glass artist and printmaker, Heinrich Campendonk was invited by Franz Marc and Wassily Kandinsky to become a member of the Munich artist’s group Der Blaue Reiter (The Blue Rider) in 1911. Later that year he took part in the first Blaue Reiter exhibition, and his paintings were illustrated in the Blaue Reiter almanac. His first prints were published in Herwarth Walden’s magazine Der Sturm in 1912. Campendonk was an admirer of primitive art and folklore, and animals often figure in his work. His paintings of animals in nature, often mystical in tone, were influenced by the example of Marc, although unlike him Campendonk often included figures in his compositions. After the First World War and the deaths of Marc and August Macke, Campendonk’s style changed. He destroyed much of his earlier work, and began to paint in a manner indebted to the dreamlike imagery of Marc Chagall, whom he had met in 1914. In the early 1920’s he took up the practice of stained glass design, and in 1925 had his first one-man show in New York. He received numerous commissions for large-scale stained glass decorations, and this public form of art was to occupy him for much of his later career. Appointed a professor at the Akademie in Düsseldorf in 1926, Campendonk was one of many modernist painters labeled ‘degenerate artists’ by the Nazi regime, and he was forced to resign his teaching post in 1933. He chose to leave Germany that year and emigrated first to Belgium before settling in 1935 in Amsterdam, where he was appointed a professor at the Rijksakademie van beeldende Kunsten. He eventually became a naturalized Dutch citizen. Campendonk’s work as a stained glass artist continued to earn him considerable acclaim - winning a Grand Prix at the Exposition Universelle in Paris in 1937 - and it was not until after the Second World War that he resumed painting.Much of the artist’s work in the first half of the 1930s was devoted to drawings and watercolours, for which he was much admired, as well as designs for stained glass. In a review of the 12th International Watercolor Exhibition, held at the Art Institute of Chicago in 1932, at which one of Campendonk’s watercolours won a prize, one writer singled out the artist’s work: ‘Heinrich Campendonk (Germany)…goes back to peasant art and legend and to the tradition of early stained glass. He is master of pattern, overlapping and fitting in his flat forms to achieve a unique design. In this way his use of different textures and combinations of low color, lit by an occasional bright flash, and held together by wide lines of black, show a highly original application of peasant motifs.’