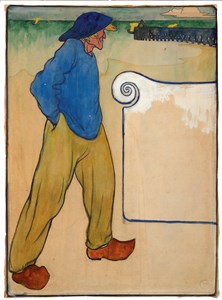 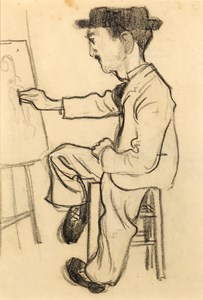 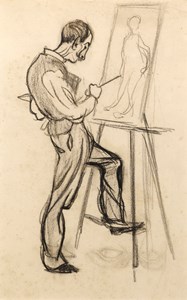 Henri Evenepoel’s brief artistic career began with his initial training in the small art school at Sint-Josse-ten-Noode, before his enrollment in the Académie des Beaux-Arts in Brussels. In October 1892 he settled in Paris, completing his studies under Gustave Moreau at the Ecole des Beaux-Arts, where he met and befriended Henri Matisse, a fellow student. Evenepoel exhibited for the first time in April 1894 at the Salon des Artistes Français in Paris, where he showed a portrait of his cousin Louise van Mattemburgh. He continued to paint a series of striking portraits, exhibiting four at the Salon de Champ-de-Mars in 1895, and indeed may be said to have been among the finest portrait painters of his time. Most of his subjects were family, friends and fellow artists, often shown full length against a neutral background, in a manner indebted to the example of Edouard Manet and James McNeill Whistler. He also painted urban scenes and genre subjects, designed advertising posters and produced lithographs and etchings, and was a keen photographer.In October 1897 Evenepoel decided to travel to Algeria for the sake of his health, and during his six months there produced a number of paintings of Orientalist subjects, painted with bright colours. While he was spending the winter months in Algeria, he had his first one-man exhibition at the Cercle Artistique in Brussels. Evenepoel returned to Paris in May 1898, and soon began to achieve a measure of critical and commercial success, but this was cut short by his death the following year from typhoid fever, at the age of just twenty-seven. Retrospective exhibitions of Evenepoel’s work were held at the Galerie Georges Giroux in Brussels in 1913 and 1932, at the Musée Royal des Beaux-Arts in Antwerp in 1953 and at the Musées Royaux des Beaux-Arts in Brussels in 1972.As the artist’s biographer Francis Hyslop has written, ‘For his contemporaries Evenepoel’s “modernism” consisted principally in his choice of subjects, and most modern painters were indiscriminately lumped together as “Impressionists”...Far from being an Impressionist, Evenepoel was actually a Realist in the line of Courbet, Daumier, Manet, Degas, and Toulouse-Lautrec. Like those artists he was concerned with much more than the raw presentation of nature; artistic and ideal considerations always played a significant part in his interpretations of the visual world. Evenepoel’s realism was usually refined, delicate, and poetic. The artist’s conviction and sensibility gave vitality to his painting...In spite of his painfully short career, Evenepoel left a substantial body of fine pictures that possess a durable value.’