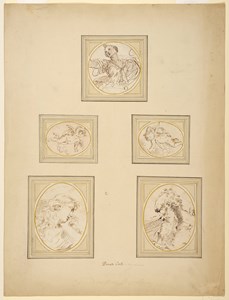 At the age of fifteen, following an apprenticeship with Lorenzo Pasinelli, Donato Creti came to the attention of Count Alessandro Fava. The Bolognese count became the artist’s protector and first patron, and the young Creti lived and worked in the Palazzo Fava for a number of years before becoming an independent master. In around 1700 he received a commission from the Counts of Novellara to decorate their family palace, and in 1708 he completed a large fresco of Alexander Cutting the Gordian Knot in the Palazzo Pepoli Campogrande in Bologna. Apart from fresco decorations, the early part of his career was taken up with secular commissions for easel pictures, such as the series of mythological subjects painted in monochrome for Marcantonio Collina Sbaraglia and now in the Collezioni Communale dell’Arte in Bologna. Together with other Bolognese and Venetian artists, Creti contributed to several of the well-known series of allegorical Tombs commissioned by Owen McSwiny in the 1720’s and 1730’s. Throughout the 1730’s and 1740’s, Creti produced several important altarpieces for churches in Emilia-Romagna and as far away as Palermo. In his biography of the artist, Giampietro Zanotti writes that Creti’s drawings were highly regarded by his contemporaries. (The painter Marcantonio Franceschini, for one, praised the artist as a ‘grandissimo disegnatore’.) He learned to draw from the nude in the studio of Pasinelli, and in general preferred to use pen and ink wash for his studies, drawn with a rapid, calligraphic stroke, although he also produced head studies in chalk. Landscapes, figure studies and portraits make up the bulk of Creti’s drawings, many of which, according to Zanotti, were given away as presents by the artist.