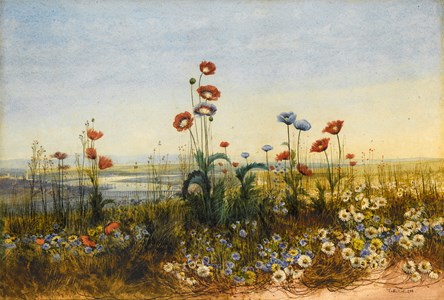 Lacking any formal training as an artist, Andrew Nicholl began his career as an apprentice in a printing firm in Belfast. His earliest paintings are scenes along the Antrim coast, and by his early twenties he had established a local reputation as a landscape painter, becoming a founder member of the Belfast Association of Artists. Among his first important patrons was the newspaper publisher Francis Dalzell Finlay, who promoted Nicholl’s work in Belfast, Dublin and London. First and foremost a topographical painter, Nicholl published 101 Views of the Antrim Coast in 1828, and provided illustrations for Henry O’Neill’s Fourteen Views of the County of Wicklow, published in 1835, and Samuel Carter Hall’s Ireland: its Scenery, Character, etc., published between 1841 and 1843. Nicholl first exhibited at the Royal Academy in London in 1832, and in 1837 was elected an Associate Member of the Royal Hibernian Academy.Around 1840 Nicholl settled in London, where he supported himself by working as an art teacher, as he had in Belfast. In 1846 he was appointed as a teacher of landscape painting and drawing at the Colombo Academy in Ceylon, where he remained for three years. There, under the auspices of his most significant patron, the Belfast MP and Colonial Secretary James Emmerson Tennent, Nicholl produced a number of views of local scenery and also provided illustrations for Tennent’s book Ceylon: an account of the island, physical, historical and topographical, published in 1860. He must have returned from Ceylon by 1849, as he exhibited some views of the island at the Royal Academy that year. He divided his time between London and Belfast, and exhibited at both the Royal Academy and Royal Hibernian Academy. In 1870 he offered twelve watercolours of views of Ceylon to Queen Victoria, who bought two of them. Shortly after his death, a retrospective exhibition numbering over 280 works was held in Belfast. The largest collection of Nicholl’s work - numbering over four hundred watercolours and drawings, as well as a handful of paintings - is today in the Ulster Museum in Belfast.