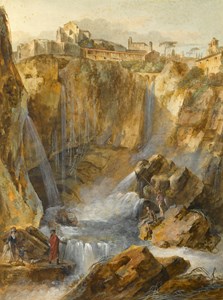 The younger brother of the architect and draughtsman François-Joseph Bélanger, Louis Bélanger (sometimes Bellangé) was a landscape painter and draughtsman, with a particular speciality of gouache views of sites in France, Italy and Switzerland. A pupil of Francesco Casanova and Louis-Gabriel Moreau the Elder, he worked primarily in watercolour and gouache. His earliest dated works were executed in 1779, and in the 1780’s he travelled throughout France, as well as to Switzerland, Italy and England. With the advent of the French Revolution, he fled France and in 1790 settled in England, where he lived for eight years and provided drawings for the print market in Paris. (Six watercolour views of London by Bélanger, each dated 1790 and possibly intended as designs for prints, are in the Ashmolean Museum in Oxford.) Bélanger exhibited landscapes at the Royal Academy in 1790 (when the catalogue described him as ‘Painter to the Duke of Orléans’) and 1797, and enjoyed the patronage of a number of English connoisseurs, some of whose London homes he decorated. After a brief visit to Switzerland in 1798, Bélanger moved to Sweden, where in 1799 he was elected to the Academy of Fine Arts in Stockholm and appointed Painter to King Gustav IV. He lived and worked in Sweden for the last eighteen years of his career, and in 1803 published a series of prints entitled Voyage pittoresque de la Suède. A number of paintings, watercolours and gouaches by the artist are today in the collection of the Nationalmuseum in Stockholm.