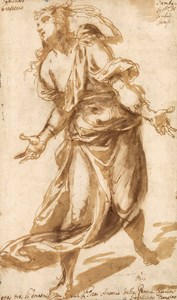 Relatively little is known of the life of Francesco Maffei, who received his artistic training in his native city of Vicenza. He was a pupil of Alessandro Maganza, whose work is often confused with his. To the early Mannerist influence of Maganza and such 16th century Venetian artists as Paolo Veronese and Jacopo Tintoretto was added, following a trip to Venice around 1638, that of such Baroque masters as Johann Liss, Bernardo Strozzi and Domenico Fetti. Maffei worked mainly on the mainland, however; in Vicenza, Rovigo, Brescia and Padua, where he spent his final years. He produced a large number of altarpieces and paintings of Biblical subjects, as well as allegorical compositions, and by the 1640’s had developed into what one modern scholar has called ‘possibly the most brilliant individual to mark seventeenth-century Venetian painting’.Only around thirty drawings by Francesco Maffei are known today, almost all of which are in pen and ink. As a draughtsman, his work has at times been confused with that of his teacher Maganza, and drawings by him have also been attributed to both Jacopo and Domenico Tintoretto and to Palma Giovane. Many of his drawings reflect something of what has been described as ‘Maffei’s loose, fantastic, bizarre, and often thrilling painting manner’. His drawings seem to have been highly regarded by his contemporaries, and are in fact known to have been collected in his lifetime.