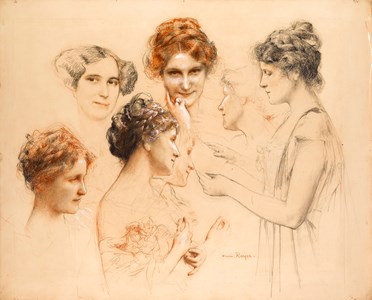 Henri Paul Royer was active as a portraitist and genre painter, as well as a draughtsman and illustrator. After a period of study at the Ecole des Beaux-Arts in Paris, he completed his training at the Académie Julian, where he studied with Jules Lefebvre, François Flemeng and Louis Devilly. He exhibited frequently at the Salon des Artistes Français from 1890 onwards, and in 1896 made his first visit to Brittany, where he returned for several years, producing genre paintings of the life and customs of the people of Cap-Sizun, south of Finistère. Indeed, he became particularly known for his views of Brittany and scenes of Breton life, which he showed at the Salons. Royer bought a house in the Breton town of Audierne, and made several paintings and drawings of the costumes of the local inhabitants of the Ile de Sein, a small island off the western tip of Brittany. He won a gold medal at the Exposition Universelle in 1900, the same year in which he was admitted into the Légion d’Honneur. He also worked as an illustrator, providing images for the novels of Guy de Maupassant, and travelled extensively throughout Europe, as well as in North and South America. Paintings by Royer are today in the museums of Angers, Quimper, Brest, Nancy and elsewhere.