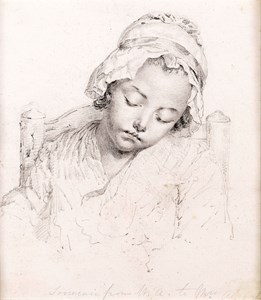 The son of the clock and watchmaker Jonas Pierre François Gevril de Carouge, Daniel Gevril was active as a portrait painter and draughtsman. He received his artistic training at the Ecole de Dessin in Geneva, winning a prize for a drawing in 1891. His earliest exhibited works were portrait drawings, shown in 1820 and 1826. From 1830 onwards, however, he seems to have concentrated mainly on painted portraits, which he exhibited regularly between 1839 and 1861. A gifted draughtsman, Gevril was appointed a professor of drawing at the Collège in his native Carouge in 1847, a position he retained until his death. His works, of which not many survive, are mainly found in private collections.Writing shortly after the artist’s death, one critic noted of Gevril that ‘His portraits, painted finely and broadly, are always a perfect likeness, thanks to his skill as a draughtsman. They have, in general, much life and relief; they give to Gevril, within the Genevan school of artists, a place of distinction.’