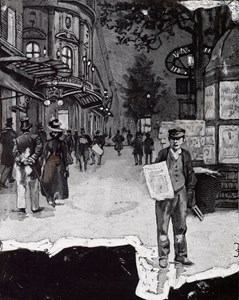 Born in Italy, Oreste Cortazzo was a pupil of Léon Bonnat and spent most of his career in France as a painter of historical and genre scenes, many of which were produced on commission for the art dealer Adolphe Goupil. He exhibited infrequently at the Salons between 1874 and 1885, and also at the Exposition Universelle in 1878 and again in 1889, where he showed four paintings and received an honourable mention. His sentimental narrative compositions were likely influenced by the rise of photography in the second half of the 19th century. Cortazzo also worked as a printmaker and book illustrator; among the books he illustrated were Eugène Muller’s La Mionette, published in 1885, and Guy de Maupassant’s Yvette, published in 1902. Together with Lodovico Marchetti and Lucio Rossi, Cortazzo also provided drawings for a lavish illustrated edition of Shakespeare’s Romeo and Juliet, published in London around 1900.