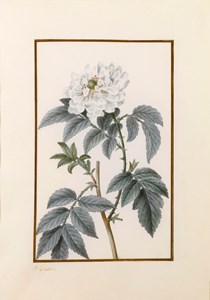 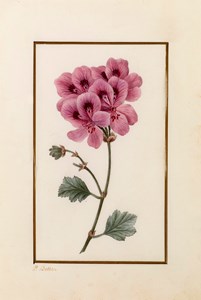 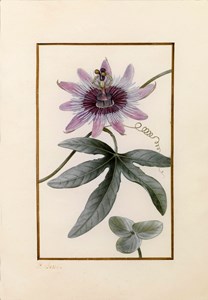 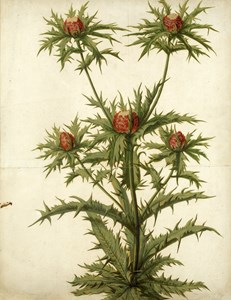 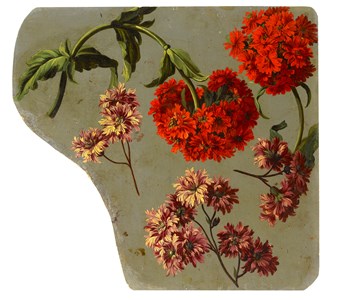 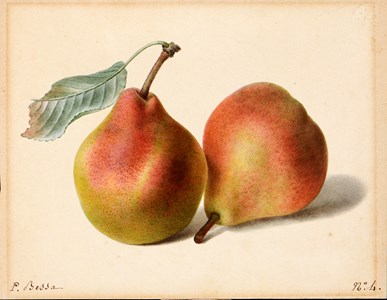 One the leading painters of flowers and fruit in the first half of the 19th century in France, Pancrace Bessa was born in the Marais district of Paris. He was briefly a pupil of the engraver and botanical illustrator Gerard van Spaendonck, but was most influenced by the work of Pierre-Joseph Redouté, with whom he also studied; one of only a handful of men to do so, since most of Redouté’s pupils were women. Bessa probably accompanied Redouté as part of Napoleon’s expedition to Egypt in 1798, and later collaborated with him on the illustrations for François-André Michaux’s Arbres forestiers de l’Amérique septentrionale, published between 1810 and 1813, and Aimé Bonpland’s Description des plantes rares cultivées à Malmaison et à Navarre, which appeared in 1813. In 1808 Bessa published his first work under his own name alone; a series of twenty-four stipple engravings entitled Fleurs et Fruits gravés et coloriés sur les peintures aquarelles faites d’après nature. He appears to have enjoyed depicting fruit, and other books he illustrated include Louis-Claude Noisette’s Le jardin fruitier, which first appeared in 1813, and Etienne Michel’s Traité du citronier, published in 1816.Bessa’s most important commission, however, was for a series of 572 watercolours on vellum to illustrate Jean-Claude-Michel Mordant de Launay’s Herbier général de l’amateur, commissioned by Charles X, King of France and arguably the most significant French flower book of the day. Published in eight volumes, the project was begun in 1816 and the artist worked on the series until 1827. Bessa’s beautiful watercolours were superbly reproduced for the book, in the form of hand-coloured engravings by various printmakers, led by Pierre François Barrois. Bessa enjoyed the patronage and protection of the Duchesse de Berri, to whom he was appointed flower painter in 1816 and drawing master in 1820, and also worked for the Empress Joséphine Bonaparte. In 1823 he succeeded Van Spaendonck as painter to the Muséum d’Histoire Naturelle in Paris, by whom he was commissioned to produce studies of flowers on vellum. Bessa exhibited at the Salons between 1806 and 1831, when he retired to Ecouen. Little is known of the last decade of his life; his last published work was the Flore des Jardiniers, amateurs et manufacturiers, which appeared in 1836.As highly regarded in his day as both van Spaendonck and Redouté, Bessa was, however, less prolific than either. Nevertheless, his works were in great demand among wealthy French, Royal and foreign collectors; as the contemporary French writer on art Charles Paul Landon noted in 1810, ‘So far as flower and fruit pieces are concerned, there seems to be a strong competition between Redouté and Bessa, being both equally talented, hard-working and successful.’ A modern scholar adds, ‘[Bessa] stands head and shoulders above his contemporaries...his sense of floral structure and the vitality of his watercolours are no doubt due to Redouté’s teaching and influence...his sincere, straightforward approach qualifies him as an artist of considerable charm.’