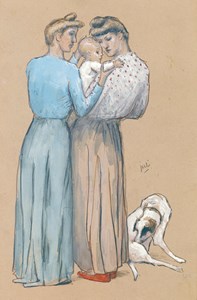 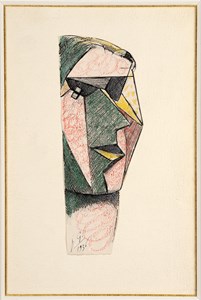 Julio González is regarded, alongside Constantin Brancusi, Alberto Giacometti and Pablo Picasso, as one of the most innovative and original sculptors of the 20th century. Despite his professional training as a metalworker, before 1928 González was working mainly as a painter. He also drew throughout his career, and his early drawings – such as the present sheet, which may be dated to around 1906 – display the artist’s origins in the turn of the century style of the School of Barcelona, despite the fact that he had been living in Paris since 1900. The influence of French painting of the same period is also readily evident. As Tomàs Llorens has noted of the first few years of the 20th century, when Picasso and González worked closely together in Paris, ‘Gauguin and the style of a group of his followers, Synthetism, left a visible mark on the work which Picasso and González did during that period, especially in the case of Picasso, who was going through what he later called his “Blue Period”. The works by González that we can date to those years – numerous drawings devoted to subjects such as mother and child, landscape and daily life, and a few oil paintings – sometimes show a clear resemblance to Picasso’s “Blue” style, though they are graver in style and more reminiscent of Puvis de Chavannes than of the painter from Málaga.’ González’s friendship with Picasso ended abruptly in 1908, for reasons that are not quite clear, and was not reestablished until the 1920’s, when Picasso asked for González’s help and advice in working in metal sculpture.