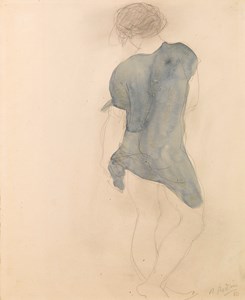 An amateur artist and disciple of Auguste Rodin, Odilon Roche was one among many fascinating characters in Paris in the first quarter of the 20th century. Never more than an amateur artist, he actually began his professional career as a wine taster, travelling throughout Europe attending wine fairs. In 1902 Roche opened a shop in Montmartre selling artists’ supplies, where among his customers were Camille Pissarro, Auguste Renoir, Maurice Denis and Théophile-Alexandre Steinlen. In 1905 he opened a second shop on the rue de Navarin selling Persian and Chinese antiques, which soon became a fashionable rendezvous for cultured Parisians. Among these were the fashion designer Coco Chanel, the gastronome Curnonsky and the writers Anatole France and Colette, who is said to have described Roche as ‘un homme fastueux dans une époque médiocre.’ It is not known where and from whom Roche received his artistic training, but it is likely to have come as a result of the opportunity he received in 1917. That year his friend Léonce Bénédite, the executor of Auguste Rodin’s will and soon to be the first curator of the Musée Rodin, asked Roche to classify the entire contents of the sculptor’s studio, including countless boxes of loose drawings and watercolours. The decade Roche spent on this immense project would have given him ample opportunity to study Rodin’s distinctive style and technique as a draughtsman. As a result Roche’s own drawings and watercolours, especially of female nudes, display the profound influence of those of the great sculptor. (He also assembled a large number of watercolours by Rodin - totaling almost 160 sheets - for his own collection; most of these were dispersed at auction in 1933.) On his retirement in 1931, Roche settled in the town of Six-Fours-les Plages in the Var, southwest of Toulon, where he continued to paint his watercolours, now including coastal scenes and landscapes. Sporting a long white beard and often dressed in an Eastern robe and turban, he continued to produce drawings and watercolours purely for his own pleasure. Roche does not seem to have ever sold or exhibited his work, and it was not until the early 1970’s, some twenty-five years after his death, that Roche’s work was rediscovered at the premises of a framer’s in Saint-Tropez. In 1971 an exhibition of some thirty watercolours by Roche was mounted at a gallery in Saint-Tropez, followed the next year by an auction in Paris of drawings and watercolours from his estate.